Table tennis or Ping pong whatever it is called but mean the same sport is an exciting game. People not only play this for fun or exercise this sport holds a very extreme place in the competitive sports world. Many of the players set their careers in this sport. They burnish themselves for a very long time to become a professional table tennis player and won a gold medal.

Worldwide competition like the Olympics has a different segment of table tennis. Also, the sport has an official federation, which organized official tournaments like cricket or football sports.

If someone wants to be a professional and wants to compete but doesn’t know where to begin, here is the right place they will find the answer. In this article, we will discuss how to get into competitive table tennis in detail.

What is Competitive Table Tennis

A game of competitive table tennis is a sports competition where single or double teams compete with each other to win. If we mention the commonwealth games table tennis competition, this includes nine medal events in three categories for both male and female players.

How To Get Into Competitive Table Tennis

Ping pong or table tennis is not an easy-going game in terms of professional level. To learn the game ata professional level and get into a competition one can join a club. But the club is expensive, not many will afford the fees. In that case, one can first train themselves at home first and then get into a club that will cost less.

For this one must know the basics and all about the game. We will now start discussing step by step about the process. First of all, one must know what equipment's will be needed for the game. The game doesn’t require so much equipment and accessories.

Paddles: Table tennis has to be played by the paddle. And a wise choice in the paddle will save so much time. To choose the perfect paddle one must know some of the basics about the paddle.

The paddle has four important parts to check before buying. The blade, the handle, the sponge layer the rubber.

The blade: is the widest part of the paddle by which one is going to hit the ball. To be a professional and hit the ball with accuracy one must choose the blade with maximum layer and a little bit heavy. The extra weight will give extra speed and spin.

The handle: is the part where the player holds the bat to hit the ball. The handle of flared grip is a good one. One will feel confident holding a hit as it will not slip away easily.

One of the most important concerns of the paddle is the rubber. The rubber of the paddle must have tobe ITTF approved. A quality rubber will give better speed, better pin, and better control.

Ping pong table: The table used in the ping pong sport is the most expensive equipment. But at the training level, one can use the regular table available in the house or bars.

Skills and Techniques of Table Tennis

After collecting the equipment’s now need to know the proper way to play the game. One can learn the game atthe professional level with fun.

Grip: The first concern that comes while playing the game is how should one hold the bat. For kind information in this sport holding the bat to every body movement matter to do well. The game has two ways to hold the bat. The grips are Shake hand and behold. Both grips have pros and cons but most of the expert recommends the Shake hand for the beginners. Know your level and comfort then choose the one.

Stance: At the beginning of the practice, one must know the exact and accurate stance of the game. If not the player will end up catching the bad habit of standing and it will take so much time and afford to change. Two of the main key feature of the stance is being low and wide. That means, the player has to lower their center of gravity as much as they can and their feet have to be at least 1.5 shoulder widths apart, if possible even further but 1.5 is the minimum.

Footwork: The last skill one needs to adopt before hitting the ball is footwork. Atthe table, tennis footwork is quite strange and tricky. Most of the time one doesn’t even need to move from the place but needs to adjustments with the feet by continuously moving them in the same place. At first, this is going to feel very unnatural and uncomfortable but one will get used to it after some practice.

Forehand Drive: Now it’s time to hit the ball. Once the player is comfortable with the grip, stance, and footwork then they can move to the forehand drive. In this skill, the player must focus on control, consistency, and accuracy. Don’t try to hit the ball very fast or hard, learn the constancy and learn how to manipulate the bat and the ball. Be natural and be relaxed with the stroke.

Backhand Drive: The techniques of the backhand drive are very difficult so some players found it surprising. But in principle, the skill is the same as the forehand drive. The player has to develop the control, constancy, and accuracy as the previous. We will advise the same, be natural, be relaxed and be comfortable with the stroke.

Forehand Push: In the four basic strokes, the forehand push is the most difficult one. The motion of this stroke is quite awkward and unnatural. Take time, practice a lot to improve the stroke. Don’t rush on this, be slow and learn every aspect.

Serve: It is one of the major tricks to manipulate the opponent. Learn some different serve techniques by the strokes. Don’t play the same strokes every time so that the opponent cannot predict the hit. We will recommend the player to learn super heavy backspin and super-fast serve. This type of serve gets heavier on the opponent and they cannot predict even sometimes react the serve and lose the point. 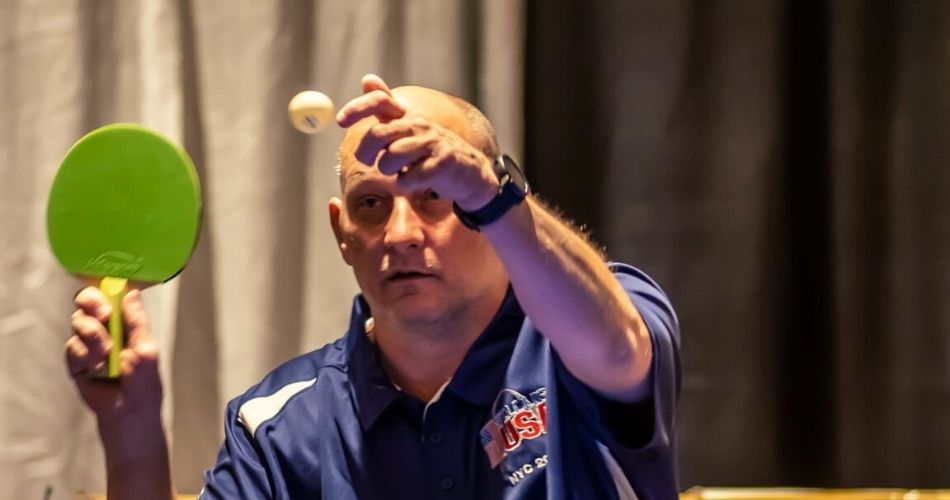 How To Get Into Competitive Table Tennis

Hopefully, now everyone knows all about how to start and play table tennis. However, to become a professional and to compete one must know the rules of the game set by the ITTF. The rules are very important to know, learn, and practice in the game before going to any competition. Those rules are,

Hurrah! Now one is ready to play table tennis on a professional level. However, before planning to go in any competition the player must practice a lot, train themselves in every possible way and every possible skill to be a good player.

How do you get ranked in table tennis

To get ranked in table tennis one have to join USATT. It’s a table tennis association. Ranking in the sport is a point-based system. The player will get ranked according to the point and by the amount of defending the professional player.

How long does it take to become good at table tennis

Normally, the game will take 5 to 15 years of dedication and practice to become an advanced and professional table tennis player. Yes, it’s a large time frame but the time will depend on the player. How much time they give to practice and training and how dedicated they are to the sport.

Which country is best at table tennis

If we ranked countries by the number of gold medals in table tennis, China holds first place with 85.7% of the score. Secondly, with 78.6% of gold, the USA is the second-best country in table tennis.

Table tennis is a fun game and can be someone's career if they took it seriously from an early age. The sport requires a lot of practice and patience. But once the player learns all the tricks and techniques they can even earn gold for the country.