Table tennis is the most exciting game which is played by two or four players. It is one of the most entertaining games which is played the indoor. It can create a better source of recreation and excitement by playing it. Table tennis game needs some qualified playing equipment, it needs two tennis rackets with a 40 mm plastic ball. This excellent game can give a pleasurable moment among the players.

It can give quality leisure time for kids and adults which can refresh their minds by creating a chance of physical exercise. Table Tennis is played in the Olympic events for the first time in the Summer Olympics in Seoul in 1988. It is played in the Olympic playing events by following some rules and regulations. This major playing event of table tennis needs some unique terms for participation. This provides some separate playing criteria for table tennis. What are the Olympic table tennis rules?  It is a question among the people they want to know much information about it, to get the specific answer with relevant information.

The participation of table tennis in the Olympic events is needed some different rules and terms. These rules are not the same as other tournaments. In the Olympic sporting events, it has a separate category for men and women. This worldwide event provides single competition and team participation.

Rally- It is the limitation of playing time in table tennis. The limitation starts from the service of the ball of any player and remains till the rebound failure other players to reach the ball on the opponent side.

Game- the participation of table tennis in the Olympic events is full of organized rallies. Players play the game with an exciting competition. The player has to gain 11 points to win the match. The estimated point is 11 for each player and team to win the game. If both team players score 10 points, a player who can gain more than 2 points, will be selected as the winner of the match.

Match- It is the organized set of playing rules and regulations for the Olympic event participation. Each match contains seven games with providing a single event for the men and women. It contains five games on a match for team participation. The participators have to win at least five games to declare as a winner in a single match. And in the team match, a team has to win at least 3 matches to win the match.

Ball- The ball must have to bounce with a height of 23 cm; a standard ball can perform a 30 cm bouncing height by its vertical drops. The balls have to design to gloss index with a matte finish.

Point- The table tennis game is played to gain the points between two players and the team. Points can be gain by when an opponent team player is unable to hit the serving ball from the player court with the tennis bats on the tennis table.

Serve-   The first player to serve the ball at the starting of the match following the event rules and regulations. Both team and player have the equal opportunity to first serve, which is declared by winning the coin toss. Each team selects one face of the two-faced coin. The opportunity of the first service between two teams is selected from the winning in the toss. The ball can be served by the opponent from playing rules and opportunity.  Each player gets a chance to serve two times in a row after the first serve of the ball.

Racket- in the Olympic participation the racket of table tennis has required a design of black on a side of the bat and other side has to contain bright red color for clear visibility. It can help to identify easily the using side of the bat. Players can identify the hitting side for the color differentiation. It contains rubber material in its both sides to provide a comfortable playing performance. 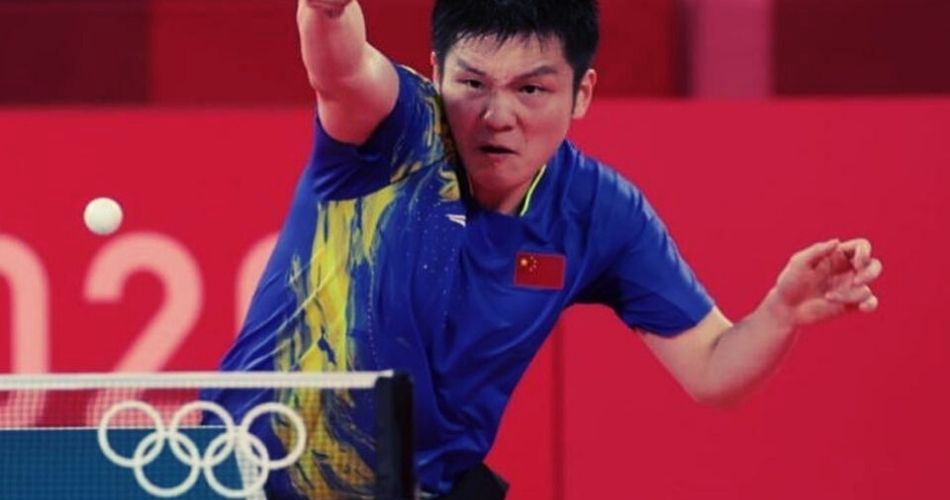 Stroke- This term usually means hitting the ball on the table tennis court. Table tennis contains many different types and styles of strokes. It is depended on the player's skills and playing techniques. In table tennis, serve is the one of essential playing criteria which is one kind of stroke to hit the ball for reach in the opponent court. Hit the ball with the bat holding by finger is legal. It ensures they hit the ball with a bat. It allows switching the bat between hands while playing.  In the Olympic event, it is not allowed to perform double hits on the ball. Playing with one hand is allowed. Hitting on the ball without any order or call is prohibited in Olympic events. Each player has to respond by hitting on the balls from an order or call. If the racket bat accidentally drops on the ground or table the players must have hit on the ball by holding it to hand.

The freehand- The freehand means an empty hand that is not carrying or holding a racket bat. It is not allowed to keep the free hands of players in the playing space during a match.  A player is allowed to sit, jump and put their hand on the table withholding the racket bat in his hand. Touch or move the table and playing surface with a free hand is strictly prohibited by the playing authority.

Playing surface- The playing surface in the table tennis game is the table tennis, playing board. It is usually a high-quality finished table which is specially designed for playing tennis. These tennis tables are constructed with regular material. It is made of much-mixed material which is perfect and durable.  It is designed dark paint which improves to create clear visibility of it.

It has an estimated measure by playing authority which is 9 feet by 5 feet in size. It has to make a distance of 2.5 feet from the surface. It can provide limited space for playing where is a chance to fall the ball while playing. It has a white-colored line that should contain in the playing line. It can take a convenient space that can provide enough space for players.

Net- It is a qualified object which can perform a superior performance and it should be extended at 6" inches on both sides of the table and height from the playing surface.

Rest period and toweling- Players are allowed to take the towel off and rest after gaining six points during a match. Players can claim to towel up for a single period duration of one minute in a match. They can call by creating a T sign with their hands for rest. The play restarts when the rest period is over or the player calls ready for play. Players must keep their rackets on the playing surface during the rest period. Players also can call for a rest at the last time of play of the match.

Players wearing- Player's clothing doesn't support any sponsor logo. And the logo size must be verified by the organizers. The player shirt can contain the name and country code of the player. It is printed on the one side in front of the shirt. Country code and the name of the player must have to print by large letters and fonts at the center back of the shirt.

Playing field- The playing field is the ground surface where the table tennis is standing for play. The ceiling must have been sized at least 10 meters high. The floor has to provide the perfect clean and free from the obstacle which will provide a comfortable movement for the player. And the floor color has to contrast with table color. Wall must be painted with a dark color up to 8 feet which are providing the opposite contrast to the table tennis ball. This is monitored from a horizontal viewing position.

Service rule- Table tennis is a technical game. This has to play subtly for getting a better playing performance. In the Olympic sporting events, it provides some following rules and regulations. It can create an intention to obey the service rules. This intention can improve the ability of the receiver to see and identify the ball for all playing times. It improves the receiver activity as much. It can help to measure the outing spin of balls hit by the server. The authority has given some rules and regulations which can enforce a superior activity during a serve. There are some rules which can provide a perfect serve.

The Olympic sport is a worldwide event. Many countries have participated in it with their skilled players with different game events. The Olympic organizer has selected some sports in the Olympics to present the skillful player with excellent playing events. Table tennis is played multiple times in this sport event. This event has unique rules and regulation which is different from usual playing terms and regulations. People can know a lot of information and details about Olympic table tennis rules with some relevant information.