Nothing is worth it without having a good lesson. On the other way, it can be called practicing. Many scholars believe that even an impossible task can be performed with a lot of practice. The same thing gets found in the ping pong games where the players have to do so many practices. From the beginning time of the gameplay, there is no way to improve the performance without making the practices for a long time.

"Practice makes a man perfect" is a common and effective quote that creates such inspiration and motivations. Just like all the other segments, the ping pong game also comes under the practicing session. But doing the practice alone is not common that get heard or seen. Therefore, we will discuss and have a brief idea about ping pong practice alone and some of the methods.

Playing the ping pong game is not an easy task as it appears. There are a lot of curriculums and terms that have to apply. Even for holding the paddle, the pattern is very different and requires a lot of practice. Smashing the ball, doing the service, making the swings are all the common things that surely require practice. So it is confirmed that the game can't be learned without lots of practice.

Methods To Follow For Practicing The Ping Pong Alone

If you're a hardcore fan of ping pong but find no one to play the game with you, some effective ways can be followed to go for the practice all alone. And the ways are:

5.Table with the returning board

In the alone practicing method, the best common and efficient type of practicing is, shadow mode playing. It also can be called the easiest one to practice. To perform this practicing session, there are two things required must.

The first one is very easy to get and available everywhere. The mirror has to place at the particular area where the practicing part will be held. Whenever the player starts practicing, following the mirror at the same time will let the player know about the style and technique of the shots, serves, and spins. The mirror system can easily help the players to improve their skills and developing their gameplays.

The second option is to go for the video system. In that case, the player can record the entire practicing time and observe attentively. It will also be enough helpful to find out the lacking and identify the problems.

According to the ping pong players, the most critical part during the practicing is, the serving period. It is not a simple task to perform as it looks. There is a lot of patience and practice behind a moderate level of serving from the beginners.

While practicing, as there is no partner available for the game, the serving can be done by own. In that case, the main thing that has to do is, serving the balls with the paddles as much as possible.

For the process, there might be a good amount of ping pong balls are needed to complete the practicing season all alone. With the long-time serving practice, the player will easily access the best serving ability and defeat the opponents in the games.

Under the single person practicing, this one is an expensive and unique type of method to follow. Most of the players will not agree to go for this practicing part. There is a machine available in the ping pong game that helps to throw the balls at an adjustable speed.

Starting from the beginner to the pro-level players, all of them can be handled easily through this ping pong robot. There is no limitation and critical steps to follow to operate the machine. The entire thing that is needed is a perfect area with the proper electric supply.

The machine will surely increase the serving, smashing performance along with the speedy returns.

Playmode is a common type of mode that can be used alone practicing. To accomplish this method, the entire thing that is needed is a ping pong table with the folding ability.

This thing helps to fold up the single part of the table to the vertical direction. Now the thing will work as a board where the players can do the practices all by themselves. But the fact is, playmode tables can't handle the faster shots like the others. As they remain enough close to the players, the players have to practice all the basic things for example the serving, making spins from the ball, etc.

But still, this method is way far better to practice alone.

Table With Returning Board

This method follows almost the same thing as the playmode method. But the difference is, this one can be applied even by a typical type of table. The entire thing that is needed, is the returning board. In terms of their availability, they can be found easily at the sports shops.

Usually, they are made from high-quality rubber and plastic. They get placed at a fixed distance by the players. If the fascination of single practicing is high, then this one can be a good choice. Players have to hit the ball against the board and make the shots.

Some of the experts even believe that this simple technique is enough helpful for improving eyesight and stamina. And as addition, different types of spins from the paddle can be placed easily into this returning board.

From aside, this practicing board can be called the improvement key of the serves and spins.

Except for all of these methods from above, there is another simple way to practice alone. There may be no availability of the equipment, but the practicing will be enough worthy to accomplish.

From the physical exercise, beginner players can surely upgrade their performing rate and ability. First of all, the players must have to increase the movement speed during the game.

In that case, footwork drilling can be a good choice. Players have to perform a good amount of running time within their limitations. Planks, pushups, sprinting, and focusing on a particular object are all of those possible physical exercises that will surely make the single practicing part worthy.

All the described methods are the most common and efficient ones to perform by the beginner or the pro leveled players. But some other types of methods may not seem enough important but can be enough helpful to improve the games. A here they have been listed below: 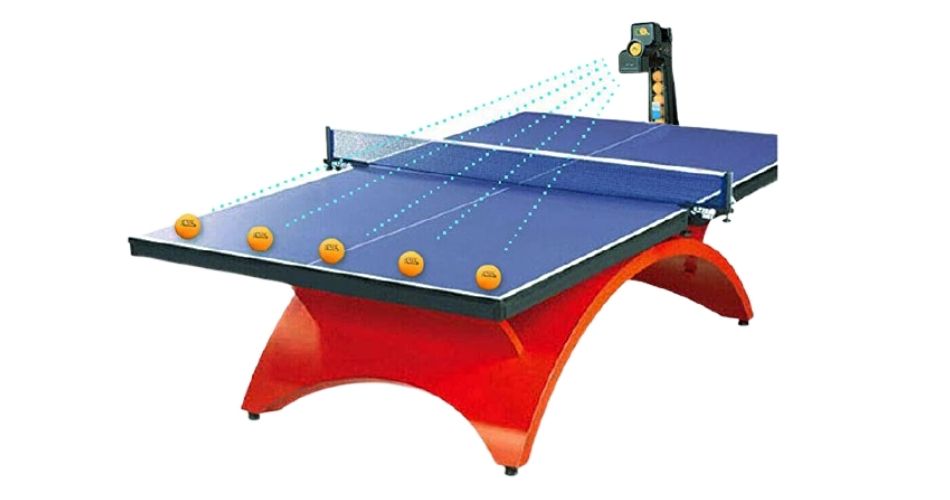 Proper knowledge about the equipment

The very first step to remember is to know about the accurate sizing weight and using the pattern of the equipment. There are a lot of playing instruments are available for the games that follow some calculation terms. For example, the size of the table and the perfect height of the net to place are the common ones. Before practicing alone, all of this information can be worthy enough and very effective too.

This will hit with a good impact for the single practicing times. There are a lot of games getting held all over the world. Luckily, most of the games and the highlights get found easily on Youtube or other social applications.

During the single practice, if the highlights can be observed, it will surely create a good impact and performing ability upon the beginner level players.

Besides, the players can easily follow the playing pattern of their iconic players which can be worthy enough. Especially, following the ITTF videos, highlights and their lessons for the beginner players can be a good decision for the solo players.

It can impact in both positive and negative ways for the players. Practicing alone by following all the methods can lead a player to the highest improvement and also can make a player fall. There are some valid reasons.

The very first thing that can hamper the gameplay is less amount of confidence. No matter how expensive and effective instruments the players can get. If there is not any confidence in their own for the game, they will surely lose interest in the game. As a result, the practicing time will not be worthy enough for the player.

To avoid this kind of situation, the players have to create satisfaction and increase their level of confidence in them. If they hit a wrong shot or serve, they have to encourage themselves and ensure to go for the better one next time. As the confidence level will increase slowly in their mind, they can deliver the best performance throughout the solo practicing or even in real-time games.

From all of these logical statements, it is confirm that the players that go for solo practicing will surely hit the maximum level of improvement. If their intention and fascination for the game remain stable, practicing alone can make them professional ping pong players.

In the end, there is no doubt that practicing the ping pong game alone is enough worthy and valuable. Besides, no matter how hard the game is, it will be learned very easily. Not all of the pro-leveled ping pong players have gone through a decorated practicing period. Some of them were enough determined and obsessed with their passion and interest in the game that took them to the next level. That is why practicing alone will probably be the best decision rather than giving up.