Some people think both are the same game. They do not know about the rules of these games. The first journey of these games had started as ping pong. Since that time people started playing this game. They just used a pair of sandpaper rackets and a ball for played ping pong.At present time people play table tennis with a pair of quality full paddle and a ball. In this article, we will discuss about ping pong vs table tennis.

Ping pong and table tennis are not the same game. There has a huge difference between them. The difference table is given below.

Most of the people think that table tennis and ping pong are the same sports. Because both are played on a flat table where two equal courts have. The courts are divided by a fixed net. Players hit the ball on both sides one by one. Players used paddles. So, people think that.

The game came first in the market in the early 20th century. The different manufacturers had used several trademarked names. The original trademarked name was ping pong. After passed some time, the ping pong association was formed and revived in 1902. When the old ping pong association had broken in 1905, then the name of table tennis was adopted in 1921-22.  In the 1920s the game was played many countries. People started to play this game.

An English sports company which was known by John Jaques& Son was the market leader in the 1920s.  The company had used a trademarked name for table tennis. The trademarked name was ping pong. In 1926 was the year, when the first world championships were held in London. Table tennis became an Olympic sport in 1988.

This table tennis has been running as a popular game of the Olympics till now. 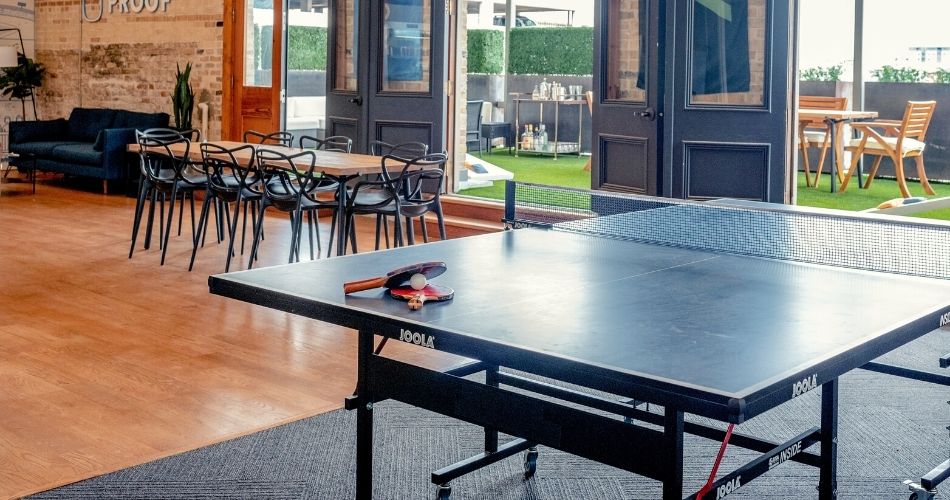 Why is there no Ping-Pong table tennis

The Official Rules Of Table Tennis

Everybody has to follow some basic rules for playing table tennis. Those rules are very important. You must know the rules before start playing. You know that Table tennis is an Olympic sport. So, it is mandatory for all players that they have to follow those major rules. Those rules are given in below.

Rules-2 Players can be serving two points at a time on each side of a table.

Rules-3 players hold the ball with palm and toss the ball at least 6 inches straight up. When the ball is on the way down, then they strike the ball.This rule is also for ping pong.

Rules-5 When players serve the ball two times, and then the ball must be a bounce in the server’s and receiver’s right court. Each player can serve twice.

Rules-6 When players serve the ball and it touches the net that is a “LET”. In a ping pong game, the ball can hit the net.

Rules-7 When players play with double partners. They can alternately hit the ball. The ball can land anywhere on the table.

Rules-8  The volley is not allowed in the ping pong game. Players can volley the ball, but the point is getting your opponent.

Rules-9 The players got the point when they serve the ball and the hit bounce back over the net after hitting by the opposite side player.

Rules-11 If there is no any referee during playtime. Players can apply the Honor system. The system is perfect for players.

The Basic Rules Of Ping Pong

Ping pong is an alternate for table tennis. Anybody can play this game. This game has no hard restrictions like table tennis. The basic rules of ping pong are given below.

In this game, players hold the ball with your palm. The ball must toss at least 6 inches. After the toss, they have to hit the ball outside of the table area. Each player can serve 2 times.  After hitting, if the ball touches the net and also touches the opposite side, it is known as “let” serve. When the ball hits the net and also drops the floor, then you will lose the point.

Players can serve diagonally in singlegames; it is not allowed indouble games.

Players can do long serve. Generally, players win the ball. If the opposite player does a long server, the ball touches the others players' paddle and goes out from the game table.

Every player knows that a match has multiple sets. Each set will finish when one player got 15 points.

They can apply the Deuce rule. When the score is 10-10, then each player can serve for only one point. Players can switch sides when one player reaches 5 points. Players cannot volley. If they hit the ball before land your side table, they lose that point.

Players have to play with it carefully. If the ball touches the edge ofthe opposite player, it is called an edge ball.

Players can use their both hand, but they can play only one padded.

In this article, we already discussed about ping pong VS table tennis. By following this article, people can understand the difference between them. We also discussed all about both games. We gave all information to help the people and also gave the basic rules of them that are very helpful for everybody.