In the selection of table tennis,the brand Stiga will be a good option with their quality product. This brand is well known worldwide. Among their product, Stiga evolution and Stiga pro carbon are two of the best product. Most of the time people got stuck between this two. As stiga has some similar products in the line and if the buyer is not ping pong savvy, possibly they will not know the difference. They get confused about which one they should buy.

Luckily, to help the buyer who gets confused between theseproducts, we will demonstrate every detail one will be looking for to know every detail about Stiga Evolution Vs Pro Carbon.

What is Stiga Evolution & Pro Carbon

Both of the products are for table tennis, but are made of two completely different styles to play. These are made for a different level of player.

Stiga is a brand that is used in the ping pong competition so there is no compromise in quality. However, selecting the best one from that brand is quite challenging as all of the product holds a very good quality. The task becomes more complex when the battle is between the evolution and pro-carbon model. Both of the product holds a very good quality but completely different from each other and for different players. These two product holds different features that are for different situation. One must know the difference and compare those to their situations to select one between the two.

If someone is looking for something more professional then they can choose the stiga evolution, because this paddle is approved by the International Table Tennis Federation or ITTF. This high performed paddle features much high quality and modern technology. One of the technology is shock dispersion which is also known as the SDT. This amazing technology helps to absorb the vibration and transfer the energy of the paddle so that the player doesn’t feel uncomfortable and itchy for the vibration while holding it.

On the contrary, the pro-carbon paddle of the stiga brand is extremely popular more than the evolution. The paddle is also ITTF approved that can be used in any official tournament. One can say that this bat is almost one of the most popular and most used paddles in the official table tennis matches. The name carbon of this paddle comes from its making technology. The manufacturer used carbon technology in that paddle to increase the power and speed by minimizing the weight of the paddle.

We will know todemonstrate every feature of these two models of the stiga brand and will compare them with each other for a better understanding.

The Blade: The model evolution of the stiga brand is made of six-layer of wood. The bat is designed in a way that tried to minimize the overall weight of the bat. This idea was to protect users wielding the paddle from fatigue after spending a long time in the game. Because of the less weight, they will not feel pain in the hand. The main technology of the blade was sturdy enough to accommodate the other technology used in the other parts of the bat.

On the other hand, the pro carbon model is made of 5 layers of balsa wood glued together with one more layer of carbon on both sides of the wood that made it seven layer blade. The good thing is the extra addition of the carbon layer doesn’t compromise with the lightweight of the paddle. Because of the carbon layer, it has a solid surface which helps to improve the speed of each shot and stroke. The combination of carbon ad wood makes it suitable for offensive gameplay.

The rubber: The evolution as 2mm thick rubber on the wooden blade improves its overall performance. The rubber on the evolution blade features an impressive amount of microscopic air bubbles that are enough to shot the ball with maximum speed and accuracy. Because of the SDT in the handle, the players will not feel uncomfortable with that aggressive shot. The rubber will generate more spin and precision while playing with it that made it better over the pro carbon.

On the other hand, the pro carbon model uses a completely different technology in the rubber called STIGA S5. The 2mm thick rubber was attached with the blade aiming a task controlling for the output of the bat. This feature is considered to be the potential effect of the wooden blade. The paddle will help the player control the output of the hit.

These features made this paddle suitable for the players who want more control over the paddle and prefer a flat shot. Opposed to it, the evolution is more of spin and speed. The player who wants spin and precision can use this model.

The Handle: We have mentioned already the SDT of the handle that makes the evolution model the best choice over any ping pong paddle. The handle can collect the tension from the surface of the paddle. After that, it will redistribute the tension to the surface it comes from to support the return shot. That feature increases the accuracy of the game.

The handle of the pro carbon is completely different from the evolution. The handle is made of a metal rod embedded within it. Aiming to give a solid grip. This will also balance the net wet of the blade.

The handle of both models is different from each other and features different technology. It is very easy to choose between them according to handle as it is clearly defined the task they are going to perform in terms of the handle.

Performance Features: The stiga evolution is a good blade offering 96/100 speed and 94/100 of spin. Both the feature is important and impacts so much in the game. As because the weight of the bat is light the control of the bat is also good featuring 90/100.

On the other hand, the pro carbon did an impressive task in speed, spin, and control. It is the best option for the pro-level player featuring 99/100 speed and 100/100 spin. The players will feel the edge while playing with the pro-carbon racket. The control of this bat is also extraordinary. It scores 99/100 in control. So it will be very easy to control the bat.

How one should choose a table tennis paddle

To choose a competition standard table tennis paddle one to have to consider and include some of the key features in their choice. Mainly the base material. The paddle must have to be made of at least 80% of wood. In addition to the material, the bat has to be less than 7.5% of the total thickness. The size of the paddle may not matter but the weight does. The lightweight bat with a great amount of speed and spin will be better. One should buy a paddle with a maximum amount of control feature. The handle must have a good grip so that it doesn’t slip away from the hand while playing. 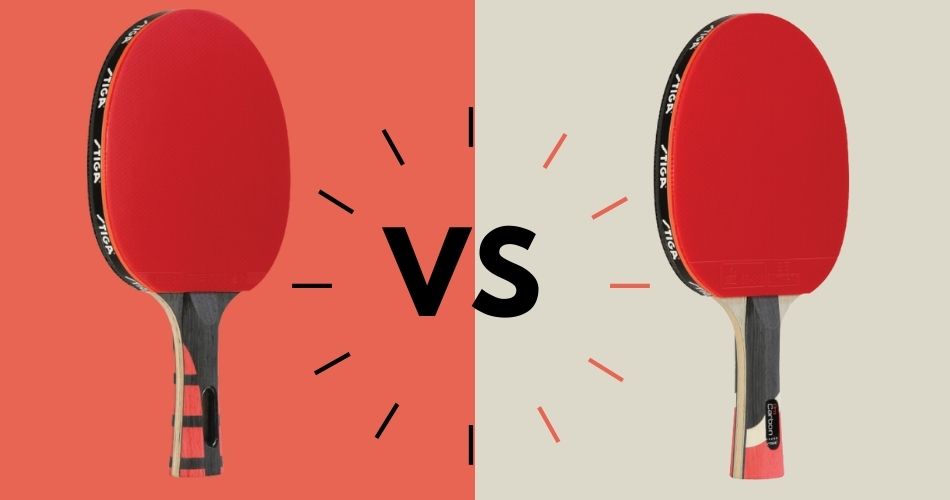 What are table tennis paddles

A table tennis paddle, bat, racket, or club whatever one called it is used by the player in table tennis to hit the ball. Usually, the bat is made of wood and rubber, sometime a little metal is added to the handle.

Why there are 2 colors on a ping pong paddle

The stiga evolution and pro carbon paddle, both hold a magnificent high quality and performance. We have already discussed all the useful features of these two bats above. Both of the batsare ITTF approved which means one can use the bat in the competition. However, the pro-carbon paddle is more ideal for the aggressive and attacking game. Because of the high amount of speed and spin it provides along with the control. The evolution is more of a smooth game. The lightweight bat provides an average amount of game but is not suitable for aggressive attack play. If the player is somewhere middle can choose the evolution racket.

Both batsare made for a different style of game. That’s the reason they are better classified as a strong pair. Hopefully, the reader will find this Stiga Evolution Vs Pro Carbon article informative and helpful.